Andy drew so much from his hometown….Not only the names of people, but locations and the feeling between people. There is a kindness that you don’t find all the time.

Just a stroll down Main Street in the “Friendly City” reminds people of the small town of RFD Mayberry, which became popular in the television series of The Andy Griffith Show. Don’t expect an exact replica of the town of Mayberry, but fans of the show can visit tributes and actual connections to The Andy Griffith Show. Ranked as one of the friendliest cities by USA Today, the city has embraced the gracious side of life. 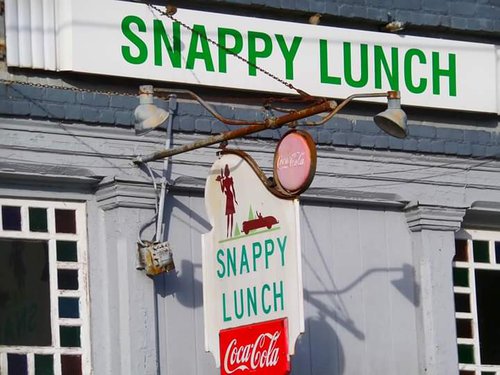 Before you take off down Main Street, stop by the Visitor Information Center to get a guide of downtown. Once you’re off, plan at least a full day to visit the tons of retail shops, gift shops, antique shops, and restaurants in the historic downtown district. You can also do a little wine tasting along with movie watching in the Earle Theatre or watch live concerts at the Blackmon Amphitheatre.

There are many RFD Mayberry tributes and connections in downtown Mount Airy to visit, such as The Blue Bird Diner (mentioned by Barney as the workplace of his secret girlfriend Juanita), Snappy Lunch (known for their pork chop sandwiches and mentioned in a The Andy Griffith Show episode), Floyd’s Barber Shop, Wally’s Service Station, TV Land statue, the Andy Griffith Museum, and more! 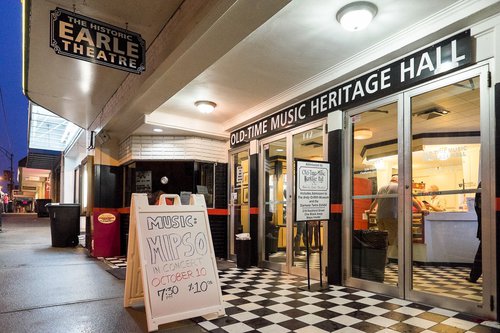 The Mount Airy Museum of Regional History is also worth a visit with memorabilia from Andy Griffith, Donna Fargo, and Chang and Eng. For music lovers, the Old-Time Music Heritage Hall inside the Earle Theatre is a must-see attraction with artifacts and audio tours of bluegrass history from the area.

Before you leave downtown, you’ll want to ride “Mayberry style” in one of several RFD Mayberry squad cars that will cruise you around town while you learn about the history and connections to The Andy Griffith Show.

Finally, you might also make a trip to Mount Airy during one of its many events like Mayberry Days, Autumn Leaves Festival, BudBreak Wine Festival, and much more.

If you haven’t already, we invite you to dip your toes into the nostalgic, make-believe waters of Mayberry.