Photo Credit: Hobart Jones The festival, which takes place Sept. 18-24, celebrates all things Mayberry in the hometown of Andy Griffith. This year’s list of actors includes Betty Lynn, Maggie Peterson, Clint Howard, Rodney Dillard, Ronnie Schell, Margaret Kerry, LeRoy McNees and Joy Ellison. Lynn played the role of Barney Fife’s sweetheart Thelma Lou on the famed show and has resided in Mount Airy since 2007. Peterson played Charlene Darling, and Dillard was one of her brothers. Howard, the younger brother of Ron Howard, played Leon, a cowboy hat wearing kid. All actors will make appearances and sign autographs throughout Mayberry Days, while Schell, Kerry, Dillard and McNees will perform ticketed shows. Joining in the fun is Karen Knotts, daughter of Don Knotts, aka Deputy Barney Fife. She will perform two shows in tribute of her father: “A Deputy’s Daughter” and “Tied Up in Knotts.” Other notables include George Lindsey Jr., son of the actor who played Goober, and Bettina Linke, wife of associate producer Richard O. Linke. Once again handling the master of ceremonies role throughout the festival will be David Browning, better known as the Mayberry Deputy. Mayberry Days starts two days earlier this year, with activities on Monday and Tuesday anchored by shows from nationally-known comedian John Floyd, aka The Mouth of Mayberry. The earlier part of the week will also be a good time for fans to tour the remodeled Andy Griffith Museum, which re-opened in late June after a half-million-dollar renovation. As always, bluegrass and country music will play a big part of Mayberry Days. Rodney Dillard, a member of the International Bluegrass Hall of Fame, will play a concert honoring his late brother, Doug. Balsam Range, winner of two IMBA Entertainer of the Year awards, will perform, as will the popular Malpass Brothers, known for their traditional country sound. The most-attended event is always Saturday morning’s Mayberry Days parade. It features all the special guests, along with many planned and unplanned Mayberry-themed floats and cars. “In addition to the special events, many folks come to take a step back in time and enjoy a slower pace of life,” says festival organizer Tanya Jones of the Surry Arts Council. “They play checkers, eat barbecue, drink a bottle of pop and have a reunion with fans of the show.” For Mayberry Days info, call 336-786-7998 or visit www.MayberryDays.com. 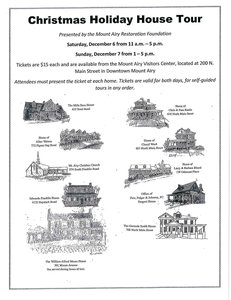 The Mount Airy Restoration Foundation presents the Christmas Tour of Homes on Saturday, December 6 from 11 a.m. to 5 p.…