North Carolina’s newest culinary trail showcases a heritage food passed down from generation to generation in Surry County. The Surry Sonker Trail leads visitors to several places that serve sonker – a cobbler-esque dessert unique to the county. Seven trail stops offer this sweet confection on their regular menu. An additional stop is a pottery studio selling sonker baking dishes and sonker cookbooks. So, what exactly is this authentic Southern delicacy? Sonker is similar to a pot pie or cobbler. It comes about by blending fruit and unshaped dough that is sweetened with sugar, molasses, or other secret ingredients. Sonker is also similar to snowflakes in that no two are exactly alike. “Everyone has their own recipe,” says Carolyn Carter of the Rockford General Store, “and I’ve never had a bad one.” Sonker’s origins in the county date to the early 1800s. A common belief is it was made to stretch the usage of fruit in tough times, or as a way to utilize fruit toward the end of its ripeness. A lot of places on the trail, including Rockford General Store, feature sonker that is baked; however, Loretta Flack of Roxxi & Lulu’s Bakery in Elkin has a different philosophy. Her grandmother taught her to cook a dumpling-style sonker in a pot on the stove. “The dumplings sit on top of the fruit,” says Flack. “When you cut into the dumplings they are like a biscuit inside – fluffy and soft with the flavor of the fruit.” Not far from Roxxi & Lulu’s Bakery in Elkin is Heaven’s Scent, a hometown bistro featuring a recipe handed down from Linda Darnell, mother of co-owner Jones Darnell. “Our sonkers are all baked. They have a crust on top, and no crust on bottom,” says Heaven’s Scent co-owner Jeff Taylor. “We do not use a glaze. The butter itself gives it a bit of a glaze. Most people like our sweet potato sonker. That seems to be everyone’s favorite.” In addition to Heaven’s Scent, Roxxi & Lulu’s Bakery and Rockford General Store, there are four other eateries on the trail. They are: The Living Room Coffeehouse in Pilot Mountain, Putters Patio & Grill in Dobson, Trio Restaurant in Mount Airy, and Miss Angel’s Heavenly Pies in Mount Airy. Another trail stop is Mayberry Pottery in Mount Airy, where visitors can purchase baking dishes and sonker cookbooks. The most unusual sonker on the trail belongs to Miss Angel’s Heavenly Pies. Owners Angela and Randy Shur are natives of Long Island, NY, and have bestowed a northern flavor on this tasty treat. They utilize a crumb-based crust, and drizzle a moonshine glaze over the crust. “They tease us for being from the North, so I don’t call it a sonker,” says Angela Shur. “I call it a zonker because when you eat ours with moonshine, you go zonkers.” The trail was created in early January by the Tourism Partnership of Surry County. It aims to spotlight a heritage food at a time when culinary trails are gaining in popularity. “People travel now to find good food and this ties in nicely,” says Jessica Roberts of the tourism partnership. “We have visitors who have picked up the brochure and said, ‘Oh wow, that reminds me of what my grandmother baked,’ or ‘That reminds me of what my mother made for me when I was growing up.’ We’re getting a lot of good feedback from the trail already.” That sentiment is echoed at the state level by Wit Tuttell, executive director of Visit NC. “These unique trails bring the history and culture of the state to life through food,” Tuttell explains. “They showcase the diverse landscape of North Carolina by highlighting the customs and local foods that make a visit to our state so special.” A brochure map has been created by the Tourism Partnership of Surry County to guide folks along the trail. It includes all the key info to enjoy a day or two along the trail. The brochure map is available at no charge by calling (800) 948-0949, or by requesting a map online at: www.SonkerTrail.org. Also, you can "like" the Surry Sonker Trail on Facebook! From left to right - Peach "Zonka" at Miss Angel's Heavenly Pies in Downtown Mount Airy, followed by Blackberry Sonker at Rockford General Store. From left to right - Peach Sonker (a stove-top version) from Roxxi & Lulu's Bakery in Elkin, followed by Sweet Potato Sonker with Ice Cream from Putter's in Dobson 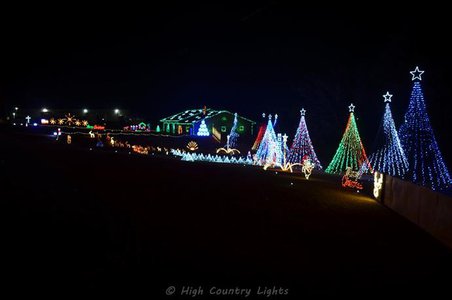 From elaborate walk-through and drive-through displays, to families decorating their homes with thousands of lights set…