Black Violin to Appear at the Historic Earle Theatre

Will Baptiste and Kev Marcus, the duo who make up Black Violin, saw their major-label debut, Stereotypes, debut at peak positions on the Billboard charts (including #1 on the Classical and Classical Crossover charts), have sold out their last 10 consecutive shows, and are preparing to embark on their first European tour.  In the past year they have been featured on NPR’s Morning Edition, The Wendy Williams Show, and Ellen.  And on Friday, April 15, they will be in Mount Airy, NC, at the Historic Earle Theatre and Old-Time Music Heritage Hall (142 North Main Street, Mt. Airy, NC) at 7:30 pm. Baptiste and Marcus first met in Ft. Lauderdale and played together in the orchestra at the Dillard High School of the Performing Arts.  Classically trained by day, they faithfully put on their headphones and listened to the hottest rap records each night.  They went to different colleges but reconvened afterwards.  They developed an act covering hip-hop songs on their violins, which became popular in local clubs.  Two years after sending in a tape to Showtime at the Apollo, they were invited to appear on the show – which they won. The pair created a distinctive, peerless sound.  “A hard-hitting beat with lush string sounds,” says Baptiste, “something you can listen to if you don’t listen to hip-hop, or if you don’t listen to classical music – we bridge that gap.” Friday, April 15, Black Violin will perform for over 425 5

grade students from Surry County Schools and Mount Airy City Schools.  That evening, at 7:30, is the public performance.  Tickets can be purchased from the Surry Arts Council office (218 Rockford Street, Mt. Airy, NC, 336-786-7998) or online at surryarts.org.  Reserved orchestra seats are $25 and balcony seats (general admission) are $15. The residency is funded in part with a grant from South Arts. 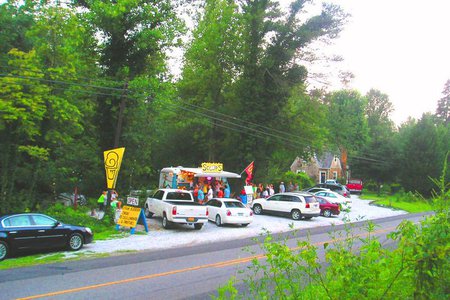 Scoops Ice Cream &amp; Such is a hidden gem in a rural area of Surry County, yet located close to I-77, just off of Hwy…